Brenda originally trained in drawing at St Martins School of Art, and her career spanned fashion, advertising, teaching, writing, book illustration and television.  She lectured on aspects of fashion and design from haute couture to clothing for people with special needs, in the UK and USA.

Having been interested in ballet from her student days, she began, for her own pleasure, to draw dancers and make small figures in direct plaster.  She attended photo-calls, where she would sketch the dancers, going on to photograph the subjects she would go on to sculpt.  Her meticulous costume detail and exactness of dance positions, coupled with instantly recognisable likenesses are characteristics of her work.  The sculptures are cast in bronze using the traditional lost-wax process, and most unusually, Brenda did practically all the finishing and chasing herself at the foundry. 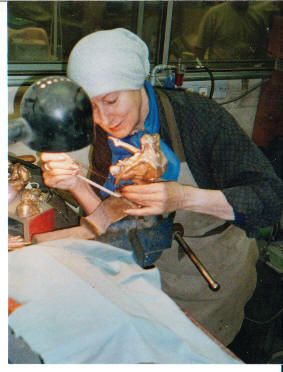 The sketches she made at photo- calls proved to be as popular as her sculptures;  her ability to capture the essence of the dancer with a few lines was amazing.  Some she left as simple line drawings, others were coloured at a later date.

One of four children, she was born Brenda Clark in Lewisham on July 5 1926. Her father was a Yorkshire-born watch and clockmaker, who also made and sold jewellery and she undoubtedly inherited her skills for miniaturisation of detail from him. She entered St Martin’s in 1942 on the strength of her school certificates and a portfolio of drawings. Half way through her course, she took her portfolio to Norman Hartnell and was engaged to sketch his designs. During the war many sketches were sent to clients unable to travel to the salon.

One morning, Brenda emerged from Oxford Street tube station to find that John Lewis, a popular source of rationed fabrics, had been gutted. On another occasion, the nearby buildings at the Bond Street and Bruton Street cross-roads had vanished in a rocket attack. The famous Hartnell 1930s art moderne mirrored interiors were also damaged; luckily they were empty at the time.

After her home in Blackheath was destroyed by a V2 rocket, her family moved to a house boat at Henley, where she and her mother almost drowned when their dinghy was swept away and they had to cling to overhanging branches.

Her sketching career, from 1943 to 1953, spanned collections and individual orders for Hartnell’s famous clientele, including members of the Royal Family. For the wedding of Princess Elizabeth in 1947, Brenda secretly stood in as Hartnell’s model for the Princess’s train, and when Hartnell was commissioned to design the dress for the Queen’s Coronation in 1953, she did the sketches, as well as those for the dresses worn by many of the guests. She had already resigned, but due to the amount of work involved she stayed on to help her replacement, Ian Thomas, who produced the final polished sketches.

Brenda had long been interested in ballet and in the 1980s she obtained permission to sketch and photograph dancers of the Royal Ballet Company. From these she made sculptures, capturing the fleeting beauty in movement of those she most admired, many of which were exhibited in London galleries and were sought after by collectors.

She was equally exacting in the lighting and photography of completed sculptures – and indeed in lighting design more generally. In 2011, she joined the Marylebone Society and Westminster planning inspectors in taking action over what she deemed inappropriate “motorway lamp standards” installed on the platforms at Baker Street Station, which she could see from her flat and studio.

Brenda lectured at the London College of Fashion, the Lucie Clayton School of dressmaking and West Dean College, and appeared on television programmes. During the 1970s she published three books on dress design. She also designed attractive and practical clothes for the disabled under the auspices of The Disabled Living Foundation.

In 1949 she married an RAF officer, Robert Naylor. They divorced in 1969, but she remained friends with him and his second wife.

Brenda was working up until the week before her death, thinking nothing of rising at 5am to go to the foundry.  She made many friends over her lifetime, and made great efforts to keep in touch with them all.  She was a great letter-writer, and an even greater telephone caller, and always began a phone call with the same words, and there are many people who still miss picking up the phone to hear  ‘David, it’s Brenda’.  (insert name as appropriate!)

Brenda left instructions that her art created over many years should benefit charity after her death, and particularly help dancer’s move on to second careers following their life on stage. Her executors are working to promote her work on behalf of the DCD and the RNLI.

OWN A BRENDA NAYLOR ORIGINAL

If you would like to own a unique Brenda Naylor piece please get in touch and we will let you know how to go about owing one of these spectacular works of art.

Powered by OpenCart Made by ThemeGlobal - OpenCart Template Club